If there’s one thing we love about CIRCA, it’s the chance to “tour” the great vernacular architecture that makes America wonderful. We’re fascinated with the sweeping Southern porches, the Pueblo Revival homes of the Southwest, and the Craftsman bungalows dotting the Pacific Northwest. The midwest offers classic American Foursquares and majestic Queen Anne beauties, and New England satisfies our cravings for snow-covered colonials. America’s got style, that’s for sure! To help us decipher which style is which, we’ve enlisted the help of architectural conservator Hänsel Hernández-Navarro, who will be teaching us about styles on a bi-weekly basis. First up is the great Prairie Style!

Some years back I decided to visit my friend Bob in the Twin Cities. Bob had lived briefly in NYC, and had moved back to his home state after retiring from the airline industry.

Having never been to Minnesota before, and all I knew about it was the state motto, “land of 10,000 lakes”, skits from “The Mary Tyler Moore Show”, and broadcasts of “A Prairie Home Companion”. “That’s right,” I said to myself, “I am going to the American Prairie, the land of Frank Lloyd Wright and its eponymous style of architecture.” Being an architecture devotee, I did my research as to what I could find and see of the style during my visit. I was in for a treat, and Bob was very generous in driving me around on this treasure hunt. How to Identify the Prairie Style

The American Prairie Style (1900-1915) can be classified as a sub-style of the larger Arts and Crafts (“Craftsman”) style architecture. In fact, the Foursquare house is said to be the earliest manifestation of the Prairie Style at the turn of the 20th-century. The style is also known as Prairie School Architecture.

The Prairie house is one of the truly vernacular American styles, such as the Stick Style, or the American Octagon. The name is a reference to the stereotypical image of the Midwest prairie: wide, flat, horizontal, uninterrupted expanses of land extending to the horizon.

The early work of Frank Lloyd Wright, once he left the office of mentor Louis Sullivan, is in this style and he is the acknowledged master of the Prairie house. But some scholars attribute the genesis of this new organic and freer American architecture to Sullivan.

The quintessential architectural features of the Prairie Style, according to Wright, are: 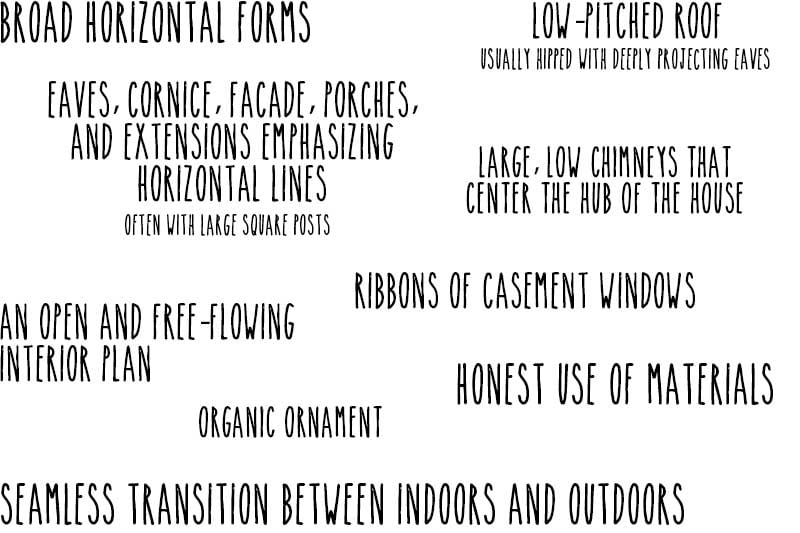 History of the Prairie Style

Beginning with the 1893 Chicago’s Columbian Exposition and up to the 1920s, an entire generation of builders and buildings favored the Beaux Arts style and other transplanted historicist styles. Wright called this type of house a “bedeviled box with a fussy lid”. He and the other Prairie architects rejected the ornate Victorian and classical revival styles, believing that these ubiquitous, derivative, claustrophobic boxes were not appropriate for the citizens of a democracy. They felt Americans deserved something better which reflected their own culture and time. The Prairie is a style that expressed America’s democratic spirit by recalling one of its most distinctive landscapes.

Thus, the craftsman’s box: a Midwest reaction to the Beaux Arts, combines high-tech with a craftsman’s sensitivity to the expressive force of economical forms and common materials, stripped of exotic and historical associations. The low roof, the spreading soffits, the continued window bands, and stratified materials gave a house its program: literally a shelter on the prairie. Although some wealthy clients favored the style to be built on large estates, the style is most prevalent in small lots of urban and suburban residential developments, which is a paradox. The prairie can be as small as your own city lot can allow. Another reference to democracy.

Wright gave birth to the style in his early houses in the Chicago suburbs of Oak Park and River Forest. Subsequently, his former students and associates spread the style in the commercial centers of Minnesota, Iowa, and Wisconsin.

The Prairie Style in Minnesota

Bob drove us to Lake of the Isles, an upscale neighborhood in southwest Minneapolis. There we found many Prairie style houses built in the first decades of the 20th-century. The one I wanted to check out was the Edna S. Purcell House by Purcell and Elmslie built in 1913. Theirs was one of the most prolific and successful architectural firms of the Midwest, and they even designed work in other parts of the country. They were active from 1910 to 1921, and the central feature of Purcell & Elmslie’s landscaping program was directional orientation. 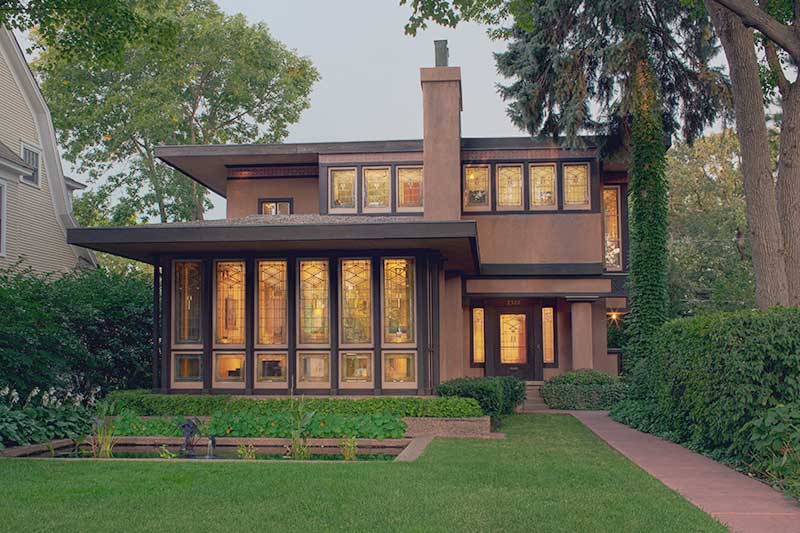 One thing I noticed about the Purcell House is that it was pushed all the way back to the rear of the lot, about 20 feet. It had a small pond in front of it. It was a two-story house with flat roofs and long flat eaves. You approached the house from the side, down a path, which had a modest main entrance portico. Unmistakable were the large expanse of stained glass: at the main living space on the first floor, and in a ribbon of casements windows on the second. Modest, I thought, but very handsome and elegant in this residential suburban street.

It is said that Purcell & Elmslie made a specialty of the restricted suburban setting. Since the typical lot lacked grand or distant vistas, their designs typically featured the front gardens and the visual relation of the house to the street. The most obvious requirement for this orientation was a deep setback. Purcell & Elmslie pushed their houses back in order to create wider vistas from within and a quiet grandeur from without. The effect is enhanced by prolonged or gently curving approach sidewalks, or by massive second-story cantilevers. On the other hand, architect Walter Burley Griffin pulled his houses forward to exploit their rear gardens, whereas Wright generally favored a central siting.

East of Lake of Isles, we drove by the Lyndale neighborhood and stumbled upon the Stewart Memorial Presbyterian Church, designed in 1910 by Purcell and Feick, before George G. Elmslie became a partner in the firm. I was astounded; here was a Prairie style church, modeled after Wright’s Unity Temple in Illinois, but in brown brick, in a working class neighborhood of Minneapolis. Although a school wing had been added, the building still preserved its historical integrity. What a beauty! You have several asymmetrical volumes in pinwheel configuration around a cube-shaped auditorium. The smallest one, off to one side, serves as entrance portico, with two brick columns supporting a cantilevered canopy. The most prominent cube, the sanctuary, is articulated not only by its size, but also by a continuous, east-facing ribbon on large-scale vertical windows of leaded glass. It has a narrower section with a deep balcony that extends to the south. Each one of the volumes is topped by simple stucco friezes or panels, framed in wood, and a flat roof with long and extended eaves; yep, “very prairie” I thought.
I was happy to find out that the church was listed on the State and National Register of Historic Places. The building has good bones, but has fallen on hard times and needs some TLC. But at least the congregation is active and occupies the building.

Bob and I also drove out to smaller communities where we found more of Purcell, Feick and Elmslie’s work, like the John H. Adair House of 1913 and the C. I. Buxton House of 1912, both in the town of Owatonna, south of Minneapolis.

All throughout his career, Wright stuck with the tenets of the Prairie Style, the ones he originated. Through his concrete block houses of the 1920s, his projects for city skyscrapers, his Broadacre City suburban development plan, his Usonian houses begun in the 1930s, even Fallingwater, Prairie elements were prevalent in his houses: simplicity, open plan, respect for natural materials, and interior-exterior integration. The most common plan united living and dining room along an axis focused around a fireplace or hearth. The seamless transition from interior to exterior under the ever-present canopy or overhang perfectly expressed the Prairie School’s unwavering conception of the house as shelter within nature.