If there’s one thing we love about CIRCA, it’s the chance to “tour” the great vernacular architecture that makes America wonderful. We’re fascinated with the sweeping Southern porches, the Pueblo Revival homes of the Southwest, and the Craftsman bungalows dotting the Pacific Northwest. The midwest offers classic American Foursquares and majestic Queen Anne beauties, and New England satisfies our cravings for snow-covered colonials. America’s got style, that’s for sure! To help us decipher which style is which, we’ve enlisted the help of architectural conservator Hänsel Hernández-Navarro, who will be teaching us about styles on a bi-weekly basis. Today we’re talking about the Greek Revival style!

“I am not an Athenian, nor a Greek, but a citizen of the world”, Socrates said. And if you look at the “Greek beauties” in CIRCA’s roster of listings you would agree that no matter where you find them, houses of the Greek Revival style represent our nation’s fascination with this romantic style in the early part of the 19th-century. These houses come to us from all corners of our nation, from the south to the north, and even New England!!

The Greek Revival style flourished in US cities, which were being rapidly settled in the decades of the 1830s through the 1860s. It became the first style in American history to be consciously understood and embraced as a truly national mode of building. This wonderful Greek Revival home in Thomaston, Maine is for sale for $173,000. Listing HERE.

Those decades were vital in every phase of development of the young United States. Politically, the system of government was maturing, and at the same time gaining flexibility to administer to the needs of an increasingly complex and diverse society. Economically, the young nation was undergoing a tremendous expansion; limitless natural resources were being developed (and also exploited), and American industrial power was being established.

By way of wagons, railroads, steamboats, and clipper ships, the style quickly moved with the settlers from the older and established states as they crossed into Kentucky, Tennessee and today’s Midwest. It also followed southern planters as they went west from Virginia, Maryland, the Carolinas, and Georgia into Alabama, Mississippi, and Louisiana. Most bizarrely, the Greek Revival even reached the West Coast disassembled into packaged sets and shipped. Not the easy way across the Panama Canal (it opened in 1914), but the long haul around Cape Horn in South America. Yeah, crazy! What we will do for fashion. An 1852 addition, the brick front of this upstate NY home has classic Greek Revival styling. It’s for sale for $469,900. Listing HERE.

A bit of historical context can explain our shift from our forebears the British to the Mediterranean cradle of civilization. The final years of the 18th century brought an increasing interest in classical buildings to both the United States and Europe. Archaeological investigations in the early 19th century emphasized Greece as the precursor of Rome, which, in turn, shifted interest to Grecian models. In addition, our Revolutionary War (1775–1783) and The War of 1812 fought against England diminished American tastes for things “British”, including the still dominant Federal style in domestic architecture.

Furthermore, Greece’s involvement in a war for independence (1821-30) aroused much sympathy in the newly independent United States. Finally, eager and youthful architects, infected by the spirit of their age, were already schooled in Neoclassical styles and were easily swayed to look at Greece as a model of a new and expressive American style.

The popularity of the Greek Revival led it to be called the National Style. Newly established towns throughout the country even took names such as Athens (Georgia, Ohio), Sparta (Virginia, Kentucky, Tennessee), Troy (Michigan, Wisconsin, New York), Utica (Ohio, New York), and Ithaca (Wisconsin, New York) as a tribute to Greek heroism. How to Identify Greek Revival Houses

• Most houses have porticos (either entry or full-width) supported by prominent square or rounded columns, typically of Doric, Ionic, and Corinthian style;
• They have low pitched gables or hipped roofs;
• The cornice lines of the main and porch roofs are emphasized with a wide band of trim;
• The windows and doors tend to be enormous;
• The front door is surrounded by narrow sidelights and a rectangular line of transom lights above; Everything is straight and rectilinear; historically, ancient Greek structures did not incorporate arches;
• Window sashes are multi-paned and double-hung;
• At the attic floor, small frieze-band windows are set into the wide trim beneath the cornice are frequent. These are often covered with an iron or wooden grate fashioned into a decorative Greek pattern.

In addition, on the basis of porch and roof configurations primarily, one can find these subtypes in Greek Revival houses:

• Entry porch less than full height, or absent completely;
• Full-height entry porch, but less than the full width of the facade;
• Full-façade porch most commonly found in southern states;
• Front-gabled roof, where the gable end is turned 90 degrees to make the principal façade, giving the house the appearance of a mini Greek temple;
• Gabled front and wing, which is the above type with a side wing added, common mostly in northern states, particularly in western New York and Ohio;
• Town house, a narrow urban house with Greek Revival detailing, both with and without porches. They are most common in port cities of the Atlantic and Gulf coasts, which were expanding between 1830 and 1860. Greek Revival Houses on CIRCA

So, if we look at our “Greek beauties” we can certainly recognize these elements and variants immediately. At Planters’ Hall, built ca. 1834 in Vicksburg, Mississippi, you see that this handsome former hall’s entry was turned 90 degrees and placed on the gable. It does not have a prominent portico, but instead a recessed one with classical Doric columns. And look at those windows, twelve-over twelve double-hung wood!!! Truly marvelous. The antebellum Isaac Scott-Huff-Johnston Home of 1846 in Macon, Georgia, is a grand Southern Greek Revival house. Typical of its location, the house has a full-façade porch, supported by glorious fluted round columns of the Ionic order, which reflect its well-mannered and genteel pedigree. In addition, you find crescent-shaped side porches, running the width of the house and leading to a rear addition. This is a grand house. The Isaac Scott-Huff-Johnston Home is for sale for $348,000. Listing HERE.

In the North, we find examples of another sub-category or subtype. Both the 1850 farm house in Brandon, Vermont and the suburban 1856 house in Franklin, New York are examples of “gabled front and wing” types of Greek Revival, which were common in northern states. The Vermont house has the gable side turned 90 degrees, a recessed entry, but with a full-width porch of square columns. What is remarkable about this mostly modest house is that it incorporates robust corner Classical square pilasters to the pediment and cornice line of the main gable, and it decided to duplicate this handsome feature in the rear addition. That really shows class. The New York house also uses the gable side as the principal façade, but it decided at some point to transform the front door in the center into a large single-pane picture window. The wing was added later as the main entry to the house. But like the Vermont example, the house incorporates incised corner Classical square pilasters to the pediment and cornice line and the added wing has the same feature. This Greek Revival beauty in Franklin, NY is for sale for $117,900. Listing HERE.

The creators of Saxton Hall in Cornwall-on-Hudson, New York were at the cutting edge of style. The house dates to 1830, just when the Greek Revival made its appearance on the American front, and what a splash it made on its arrival along the banks of the Hudson River. Just look at the facts: massive wood frame house, grand entry steps, a two-story, full-width porch with fluted Corinthian columns, plus an attic floor (with windows), plus a tower, beautifully crafted wood surrounds and lintels on every window of every façade, one-story, full-width rear porch with Doric columns, 17 rooms. The house has been lovingly restored to the very last detail, including a once-destroyed kitchen extension. With views of the Hudson, who wouldn’t want to have this magnificent house? The decline of the Greek Revival began as more fashion-conscious urban centers of the Atlantic seaboard began looking at the Gothic Revival and the Italianate styles (another British invasion), which began to appear around the 1840s. But in rural areas and the country’s interior states, the Greek Revival prevailed as the predominant style until the early 1860s, and in some cases into late 1870s. 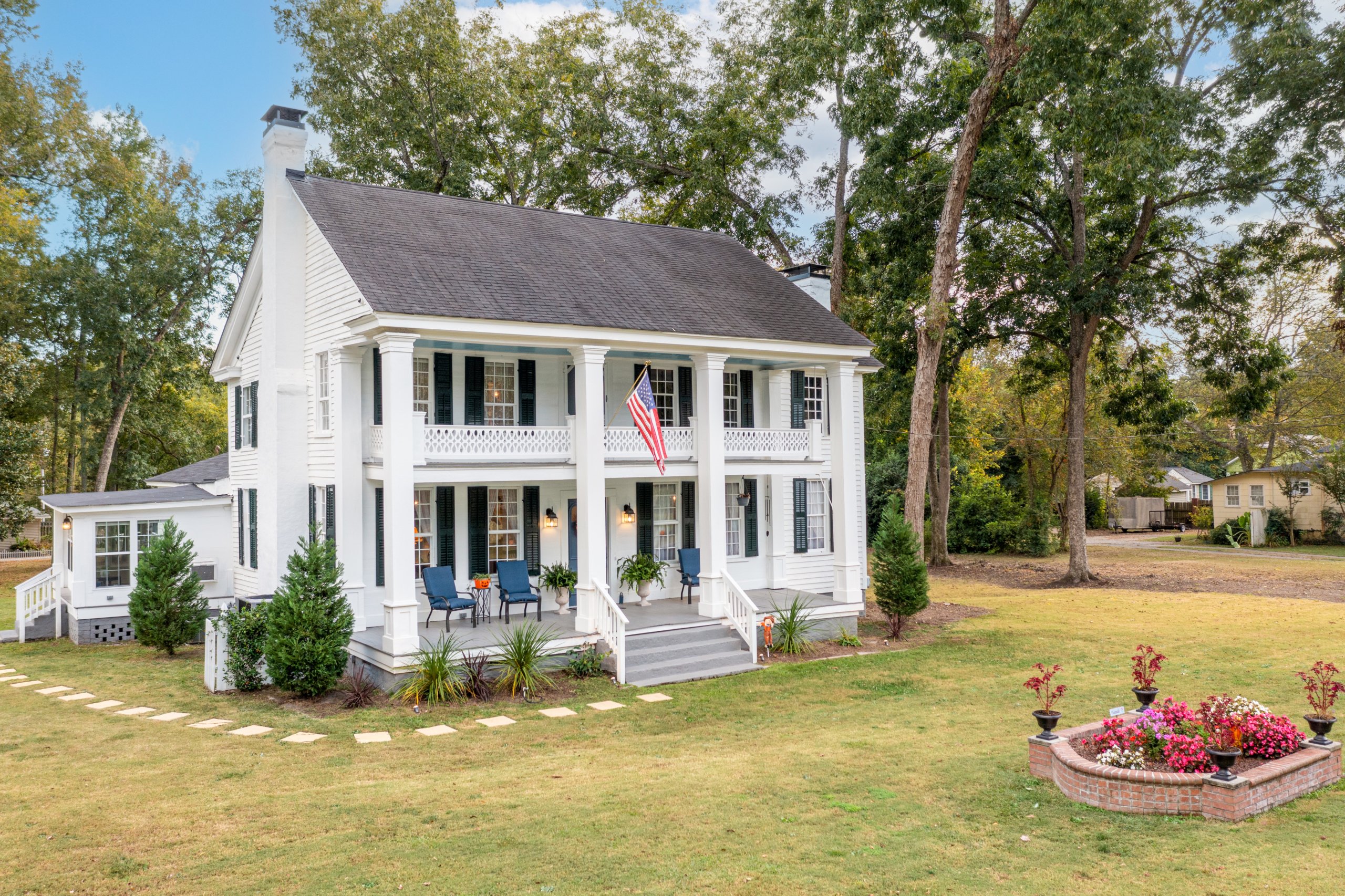