by Hänsel Hernández-Navarro (photo of Cupples House by Matthew Black)

If there’s one thing we love about CIRCA, it’s the chance to “tour” the great vernacular architecture that makes America wonderful. Today Hänsel is teaching all about the Romanesque Revival style!

From the 1820s through the 1840s there was a vital new influence in American life coming from Germany. This interest in Germany began when Americans began going there to study, and this exposure led to new currents in thought and culture: transcendentalism, innovations in educational methods, and developments in science and music. Rundbogenstil, or “round arch style”, was at its height in Germany. This style came be known as Romanesque Revival in the US.

American architects began experimenting with the Romanesque in the 1840s and 1850s in churches and public building design using round arches, corbels and historically correct features such as chevrons and lozenges borrowed from the pre-Gothic architecture of Europe, the Romanesque style. 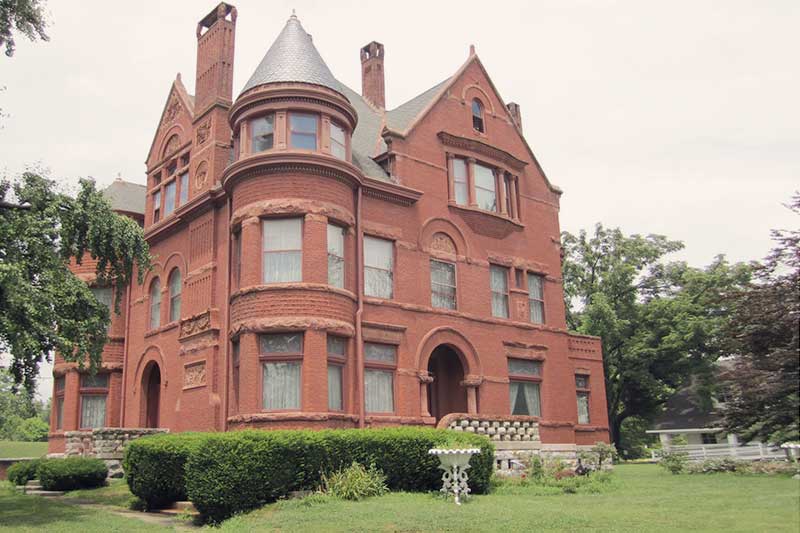 Besides the arch, one other aspect of the style was its predilection for the simple wall and sharply cut openings, and for clearly articulated geometric massing. The style is not angular, fragmented, and complicated like the Gothic. This architecture also had a strong preference for brick and many of its best examples were executed in this material, as opposed to the Gothic preference for stone. Finally, because of its directness and simplicity, the style lent itself to a wide range of practical uses, especially commercial buildings. The fact that Romanesque Revival was solidly based on concepts of form and structure, rather than historical style or religious doctrine, gave the style its strength and flexibility and made it so appealing to American architects. It was easy to design, easy to assemble, less costly (mostly brick), easily read, interpreted, and understood. Above all, it was also more readily adaptable to all types of construction, residential included, provided the scale was large enough to employ the characteristic heavy stonework.

One outstanding example of this early phase of the Romanesque is the original Smithsonian Institution building by James Renwick of 1847-55, in Washington, D.C. It was designed with extremely irregular outlines, crenellated cornices, and smooth-faced ashlar walls. But in its verticality, shape, scale, and texture, the Smithsonian building recalls its Gothic Revival contemporaries. This is a castle-like Romanesque Revival. Another early diligent proponent of Romanesque Revival in America was, ironically, the man known as the father of Gothic Revival in America, Richard Upjohn. Upjohn believed that the Gothic should the style of the Anglican Church. But for other denominations, his church commissions would be designed in the “round arch style.” This decision would have significant consequences in the United States in the decades that followed. Pointed arch would be Anglican; round arch would be everything else to Upjohn. His 1846 Trinity Church in New York is an example.

In the period 1870s to the 1890s, a number of houses began to be built in the style primarily in urban areas of the northeast and Midwest. In the more lavish houses, their massive stone or brick walls, arched and arcaded entrances, round-arch windows and the lavish use of materials symbolized the prosperity and sophistication of the newly rich in America during the Industrial Revolution.

A characteristic of the Romanesque Revival house is the three- or four-story tower with arched openings. Its low roof, gabled, or hipped, has a wide overhang. As opposed to their industrial and commercial counterpart, Romanesque Revival houses were much more expensive to build than the late Victorian styles, which were built of wood. They were generally constructed of solid masonry and were designed by architects for wealthy clients. But in urban centers one could find the more utilitarian row house with Romanesque detailing built on land speculation. The style was popular in urban and suburban areas until the fashion began to fade in the 1890s.

How to Identify Romanesque Revival Houses Interest in the style was advanced by Boston architect Henry Hobson Richardson, who designed houses during the 1860s and 70s in the then fashionable Second Empire, Queen Anne, or Shingle styles. It is said that his Romanesque houses are the solid masonry representation of a Shingle style house.

During the 1870s Richardson evolved a very strong personal style, which incorporated Romanesque forms and which, like the Beaux Arts Style, was applied principally to large public and commercial buildings. Richardson borrowed from many sources: he incorporated the poly-chromed walls seen in the contemporary late Gothic Revival; and his arches were not truly Romanesque but Syrian, an early Christian form, which springs from ground level rather than from a supporting pedestal. Most of all, he stressed unusual, sculpted shapes which gave his buildings great individuality. Richardson’s Trinity Church of 1877 in Boston did more than any other single building to change the American character of the Romanesque Revival in the United States.

The style became so closely identified with Richardson that the term “Richardsonian Romanesque” was coined and eventually used to describe all buildings built from 1880 to 1900 in the Romanesque Revival in America. The Cupples House in St. Louis, MO displays the robust stature typical of the Richardsonian Romanesque style. Photo by the City of St. Louis.

Romanesque Revival Houses on CIRCA

CIRCA’s “riveting and remarkable Romans” run the gamut, not only of location, but also scale, configuration, and execution. The Thompson, North Dakota bank building of 1900 is, although small, quite grand. It has all the markings of an eminent Richardsonian Romanesque gem: massive bulkhead of rough-faced, squared ashlar stonework; heavy, low, round-topped arches over windows and entrance, which feature rough stone keystones, arches supported by brick pilasters, a whimsical ribbon of deeply recessed phantom windows above the arcade; and smart and efficient use of brick as decorative stringcourses. It even preserves the sign band along the front parapet, a very proud Roman. The interior has all original woodwork, stained glass, and the safety vault.
Calling all preservationists! Adaptive re-use can turn this into someone’s cool abode. What I like mostly about the Old School on the Hill building of 1876 in Chamois, Missouri is the interplay of the façade bays; two of them are projecting form the main body of the building, one with a gable and the other one has that terrific wood clock tower and loggia. The roof of the clock tower is hipped, playing off the hipped roof of the building. The school building features a quite large rough-faced, squared ashlar stone base, stone stringcourse at the entrance, stone windowsills, and arched windows of different sizes and configurations, either segmental or semi-circular; and there’s even an oculus!! The 1885 Victorian Romanesque house in Philipsburg, Montana is not common. It represents one of the Richardsonian Romanesque sub-types of this style: a detached townhouse in an urban setting, in which Richardsonian Romanesque features or details are laid on it, and which typically has a front-gabled or mansard roof, but here the gables are on the secondary facades. Several features stand out: the cross-hipped roof and gables, but also the dynamic alternate use of decorative brick and rough stone stringcourses. And the typical Romanesque corbels all along the upper perimeter become a clever, light cornice without the heaviness of stone. That prominent chimney flue off to the side grabbed my attention. You can’t miss that. The recessed window openings on all facades are also typical of Romanesque. Little charming dormer on the top is like a cherry. Riveting Roman. 229 West Granite Street in Philipsburg, Montana is for sale for $265,000. Original listing HERE.

In Portland, Maine, the Officers’ Quarters of 1850 is an example of an early Romanesque house, a Victorian Shingle style house built in masonry instead of wood. A bulkhead of ashlar stone supports the endless walls of beautiful red brick and row upon row of segmented arch windows. The roof is cross-hipped, with a central gable facing the street. The windows at the top of the gable are the only semi-circular pair, topped by decorative brick eyebrows. Each side of the central body of the building features a massive brick chimney. Complimentary to the structure, and a later addition, are the two Victorian wrap-around porches. The building not only has an attic, it has a basement level too.