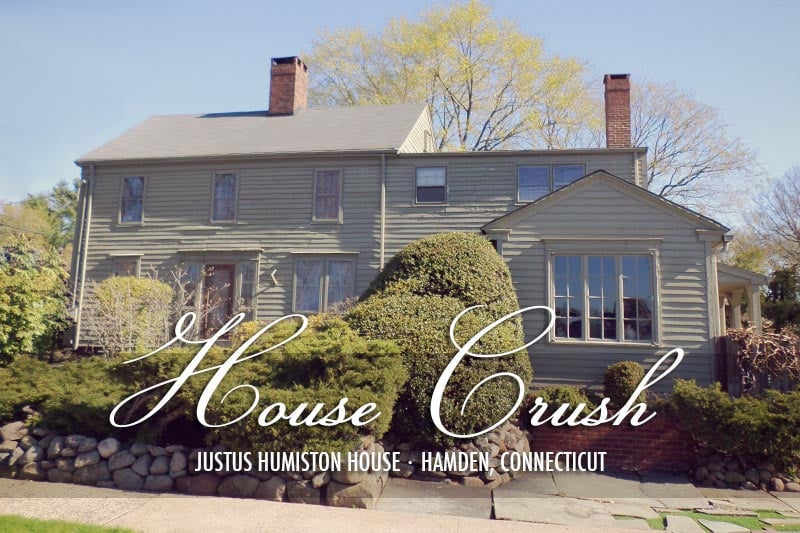 One of the many things I love about old houses is what they can teach you — what they can help you imagine. My latest house crush has me imagining all sorts of things about life in 1769! If you love early American homes as much as I do, you’re about to fall head-over-heels in love with the Justus Humiston House — for sale on CIRCA!


So now… imagine yourself in the time of the Justus Humiston house, c. 1769. The colonial farmer intended to provide nothing less than a solid structure for his family in the rural area of what is now Hamden, Connecticut. Being somewhat isolated in the countryside at that time, and in anticipation of raucous winter storms, the head of household had to be practical in his planning and construction. Heavy oak beams that support the ground floor of the Humiston house are practically whole tree trunks, notched to secure joists, beams, and planks.

That was long before your neighborhood “big box” hardware store: going out into the woods and hand-selecting trees, sawing them down, loading them into a horse-drawn wagon; the backbreaking work of hand hewing trunks, using hatchets and hand planes; possibly even using wooden pegs in some areas of the home, as nails could be expensive—nails hadn’t really become mass produced at this time (pre-industrial period). There were sawmills in colonial America, but still few enough that access could be difficult and still expensive. (That kind of hard work needs patience. I, on the other hand, stop the microwave when there’s only 3 seconds left). The year the house was built is a bit of a mystery. There are a couple conflicting references as to the definite year the home was established; but a plaque was found with “1769 Justus Humiston” name on it, so I’ll go with that. We do know, however, that Joseph Humiston was from the third generation of English families that arrived in the colonies in 1644. When he died in 1795, the farm was inherited by 15 yr old Justus, his eldest son. The home stayed within the family until the 1920s when it was finally sold. It housed for awhile a family who, out of concern for their asthmatic child, covered the woodwork with acoustic board and linoleum. In the 1950s, a new set of owners moved in and fortunately removed the excess layers. To their delight they discovered the woodwork had been well-preserved, even in the oldest portions of the house. What I adore about this house is that it has a blended clean elegance of the Colonial and Federal styles, as seen in the moldings and mantles, but it also has a subtle rustic feel. The original oak floorboards are of varied widths (however never less than 10” and in some cases as wide as 20”) and the hand-hewn beams are testaments to the hard work and history of the area. To me, it’s that blending of elements that enhances the feeling of history and wonder. (I can almost picture myself wearing a colonial bonnet, with heavy dress and petticoats…..and then wondering if my bum looks too big). Throughout the Humiston house, all ceilings and most walls are plastered. The master bedroom has exposed beams, and paneling and wainscoting are made of pine and chestnut, both of which would have been readily available in the surrounding land. When the house was first being fitted for electricity, spent corn cobs were found throughout the attic’s recesses—a common way of insulating walls in colonial times. (I can see it now: “Awwwww, Faaather, CORN for a FORTNIGHT?!” “Eat up, children! We have our attic to fill!”) An additional method of insulating was to add clapboard siding. The overlap of the planks would create a seal that would make it difficult for wind and rain to seep in. At some point the house became expanded and this included incorporating the shed (or well house) into the main structure on the front part of the house. The pitch of the roof on that portion is lower than that of the original portion, but the overall aesthetic of the house is the same, even with the irregular sizes of clapboards, which were arranged with wider slats on the bottom and narrower slats advancing up toward the roofline. Even with its large size, this lovely home has a wonderful and cozy ambiance. Ceilings are low (another way of keeping the fireplaces efficient and the home warm), but the strategically-placed windows welcome just the right amount of glow. A dream item in a home for me would be a library, and this home has a great one! That warm glow of light entering in from the windows would be perfect to curl up with a crossword puzzle and your loyal canine companion (an English bulldog named Patience). The expansive room also has ample shelving, perfect for your vintage encyclopedia set, your hundreds of leather-bound classics, and of course your J.R.R. Tolkien and Harry Potter series. Let’s talk about those fireplaces! Built of local Connecticut Red Stone, the main chimney in the center of the home heated the kitchen, a first-floor bedroom, and the library. This fireplace is huge, obviously made for cooking, baking, as well as heating its surroundings. There are two doors above the arch of the fireplace which would be used for baking. The wood or coals would be placed in the lower half of the fireplace until just the right amount of heat would build up in the ovens above, and bread would then be placed inside and baked to perfection. (Unless I baked it — then, not so much. I consider myself blessed if I can wait for a bagel to pop out of my toaster.) The existing hinges on the dutch ovens imply that the original doors were iron; but in later years wooden doors became the fashion. The dining room fireplace is only steps away from a service buffet or nook area which has built-in cabinets and fabulous latticed interior shutters. Lovely! The kitchen, too, has a beautiful built-in corner china cabinet. Other than having electrical and plumbing amenities installed and a remodeled kitchen (I would just need a microwave), the house remains almost unaltered. There is a generously sized outbuilding and a sweet little stream that trickles it’s way along the .62 acres of ground that remains of what was originally a large farm. A perfect size to enjoy alone, with your friends and family, or for playing a good game of fetch with your loyal canine companion, Patience. Curious to see more? Check out the listing on CIRCA! AUTHOR LEONA JAEGER
From the sturdy practicality of a colonial saltbox, to the lavish details of a High Victorian, Leona believes that each old home holds a beauty, solid craftsmanship, and history that is a mystery and wonder to be explored and appreciated. Leona’s dream is to find a huge farmhouse with high ceilings, wide-planked floors (complete with hidden artifacts under a loose plank), a wraparound porch, and enough acreage to house a horse or two, some dogs, cats, goats, and a ring-tailed lemur. In her spare time she can be found with her face pressed and distorted against the car window, ogling the fantastic old homes in the surrounding areas of Pasadena, California where she lives with her loving husband (who patiently peels her face off the windows and tells her to breathe) and her vivacious 9-year-old daughter.