The one-story wood frame single dwelling with a gable roof is located on the west side of Bay Road north of Prospect Street. The gabled street façade, now used as the front, contains an entrance flanked by one window on the south side and two windows on the north side; a third window at the north end of the façade occupies a position in a shed-roof extension. The south side of the house also is a principal façade with an entrance flanked by three windows on the west and one on the east. The north side contains four more windows. Two prominent brick chimneys are exposed along the roof ridge. A small one-story wood frame barn with a metal-clad gable roof abuts the northwest corner of the house and the two buildings are linked by a vestibule added to the rear wall of the house. The barn has two hanging vehicle doors on its east façade. A still-smaller one-story wood frame outbuilding with a metal-clad gable roof is attached to the north end of the barn. It has both vehicle and man doors on the west façade and windows on the end.

As early as 1929, historian Heman Howard reported that the original two-story house was significantly altered about 100 years after its 1717 erection, about the time the Williams family assumed ownership, when the first story, apparently rotted beyond repair, was removed and second-story lowered in its place. The west part of the house was built first, with two rooms on each floor and a front façade facing south. When the house was reduced in height in ca. 1798 or ca. 1818, depending on the account, an addition was built on the Bay Road (east) end, which included “the present front door” and one room as a sleeping room “for a newly married couple.” The entire north section of the house was built still later; part of the area under the sweeping shed roof was without walls and contained the well. This open condition may have existed until as late as 1830 or 1840.1 The house requires more detailed exterior and interior study to fully chronicle its construction history.

The house is sited at the north end of a lot made irregular by numerous subdivisions. It is situated amid large lawns with mature trees and plantings. A creek flows through the southern section of the parcel. A U-shaped driveway enters from two points along the road and sweeps up to the north side of the house and the attached barns. A large granary or crib with tapered sides of recent construction is located north of the house. The foundations of a historic barn are extant in a clump of trees southeast of the house.

With most of the home built as early as 1717, the house at 479 Bay Road is a significant surviving relic of Easton’s initial settlement and the agricultural landscape of South Easton. The property was listed on the National Register as part of the Bay Road Historic District in 1972. The house merits further interior investigation to better understand its construction history.

HISTORICAL NARRATIVE
According to town histories, the Josiah Keith House at 479 Bay Road was built in 1717, which distinguishes it as the oldest extant dwelling in Easton. Its first resident was Josiah Keith (1678-1754), the son of Scots immigrant minister James Keith (1643-1719) and his wife Susanna Edson of Bridgewater. Josiah Keith came to Easton about 1715 and built a barn (burned after a lightning strike in 1902) on land that, according to local historian Edmund Hands, he did not yet own. In 1717 he bought 108 acres in this section of Easton from Nathaniel Ames of Bridgewater and began building this house in early July of that year. The house was used as an inn from as early as 1724 In 1735 Josiah Keith sold his home, farm, and a quarter-interest in a sawmill he had built west of his house to his nephew Eleazer Keith (1703-94), son of Josiah’s brother Joseph Keith (1675-1730). Between 1756, when a town map shows him at this site on Bay Road, and 1771, when tax records show him with no property, Eleazer Keith sold the 479 Bay Road property to James Dean (1717-1803), the son of Dr. Ezra Dean of Taunton, who had married Hannah Hayward of Easton in 1744. James Dean is shown with a house and half-ownership of a mill in 1771 tax records, and the 1798 federal direct tax records for Easton show him with a house and outhouse. After James Dean’s death in 1803, the 479 Bay Road property appears to have passed to his son Edward (1748-1816), an early Easton physician who had married Joanna Williams of Easton in 1768. After his death in 1816 (he was the first interment in Dr.Edward Dean Cemetery on Highland Street), his widow and second wife, Anne Hayward, lived in the house until at least 1825, when a town map shows the name “Mrs. Dean” attached to the house. Another occupant of the 479 Bay Road house was the enslaved Cate Dean (whose real name was apparently Catherine Miller), whom James Dean had acquired from Silas Williams Jr. in 1770, when she was eleven years old. Cate Dean had been legally free since 1783, when a state Supreme Court ruling declared slavery illegal in Massachusetts, but James Dean’s 1790 will indicates that she was still held in bondage at that time, and probably until he died. Cate Dean remained in the household until she died in 1809; she is said to have been the last person enslaved in Easton.3 At some point after 1825 the 479 Bay Road property passed to James Dean (1768-1852), the son of Dr. Edward and Joanna Williams Dean, whose daughter Laura married Lewis Williams (1785-1860) in 1813. Lewis Williams was the son of Thomas Williams Jr. (born 1756) and Rebecca Keith Williams, who was a great-granddaughter of Josiah Keith, the original owner and occupant of 479 Bay Road. Lewis Williams is shown as owner of this house and 476 Bay Road (EST.721) on the 1851 Easton map. The 1850 census shows Lewis Williams with $4000 in real property and a farmer in a household with his wife, four of his children, and a boarding laborer; tax records for 1853 show Lewis Williams with six buildings and 233 acres, substantial real estate holdings for Easton at that time. The 1860 census shows Lewis and Laura Dean Williams in the 479 Bay Road house with their daughter Laura Dean Williams, born in 1832. Williams is shown as a farmer with $5000 in real estate. He died in October of that year of a spinal fracture; what became of his widow is unclear. The 479 Bay Road property passed to Lewis and Laura Williams’ son Edward Dean Williams (1820-1907), who is shown in the 1870 census as a farmer with $3500 in real property. He lived at 479 Bay Road with his wife Eliza A. Williams, whom he married in 1841 and whose relation to him, if any, is unknown, and their children Hannah A., a twenty-eight-year-old schoolteacher; George E., then twenty-four and working on his father’s farm, Ellis H., twenty-one and a cotton mill clerk; Clifton, fifteen; Jesse, twelve; and Ellen M., nineteen; Irish immigrant laborer Cornelius Haley boarded with the family.

The 1871 map of Easton attaches the name “E. D. Williams” to the 479 Bay Road house and “G. E. Williams,” his son, to the 476 Bay Road property even though the 1880 census shows George still in his father’s household. At that time only Edward, his wife Eliza, sons George and Jesse, and a domestic servant were living at 479 Bay Road. In 1885 Eliza A. Williams died, and the 1900 census shows Edward D. Williams and his son Jesse in the house with a domestic servant and one boarder. Tax records for 1900 show Williams as owner of a house valued at $300, a barn, shop, icehouse, carriage house, corn house, and mill, five horses and five cows, and 280 acres of tillages, pasture, meadow, wood, sprout, cedar, and unimproved land.

In 1906 Edward D. Williams deeded his “homestead on Bay Road” to his unmarried son Jesse, and he died in 1907.4 In 1910 Jesse Williams is shown in the house with the same housekeeper his father had had in 1900 (the widow Nellie or Millie Briggs) and his older brother Clifton, no doubt helped on the farm. Tax records for 1910 show that Jesse had inherited the house, some of the outbuildings, and 14 acres, while he and his older brother George owned other buildings, the livestock, and more than 525 acres.5 By 1917, however, Jesse Williams was apparently in substantial debt, and the probate court assigned Brookline attorney Fred Homer Williams, a son of Jesse Wiliams’s older brother Virgil, as an assignee for his real estate. In May 1922 Fred Williams sold 479 Bay Road and other parcels to Mary E. Knowles of Pawtucket, Rhode Island, and thus ended more than a century of Williams family ownership. Between the time she acquired 479 Bay Road and December 1925, Mary E. Knowles married William G. Newell, a Rhode Island native and Brockton dairy farmer, and the 1930 census shows the couple on Bay road with Mary Newell’s widowed mother Florence W. Knowles. Tax records for 1930 show William Newell with a house valued at $800, a barn valued at $1000, a carriage house, corn house, and poultry house, 60 acres of land, and 1,400 fowl. Mary Newell died in October 1930, and by 1940 William Newell is shown as a poultry farmer living alone in the house. William Newell owned 479 Bay Road until 1963, when he sold the house and 4.4 acres of land to Lucy M. Fay of Walpole and Helen M. Lewis of Stoughton, who subdivided the farm and placed the 479 Bay Road house and its barn on a 4.4-acre lot. Two years later Nancy Filley Ames, the wife of John Stanley Ames (1878-1959), acquired the Josiah Keith property at 479 Bay Road. John Stanley Ames was a great-grandson of shovel shop founder Oliver Ames (1779-1863), grandson of Oliver Ames Jr. (1807-77), and son of Frederick Lothrop Ames (1835-1893), who owned and occupied the Langwater estate in North Easton; John S. Ames married Nancy Filley in 1909. In October 1969, after her death, Nancy Ames’s children sold the property to Rebecca A. Thompson, who subdivided it further before moving to Easton, Maryland, and selling it to Robert F. and Jean V. Brown, who owned it until 1982. Current owners D. Scott & Meline Deware, then of Quincy, acquired the 479 Bay Road property in 1995.
Deware stabilized and restored the house, and for a decade Melanie Deware served as chair of the Easton Historical Commission. Mrs. Deware led the effort to save the Ames shovel works from character-altering development and acquired funding to survey Easton’s historic properties. 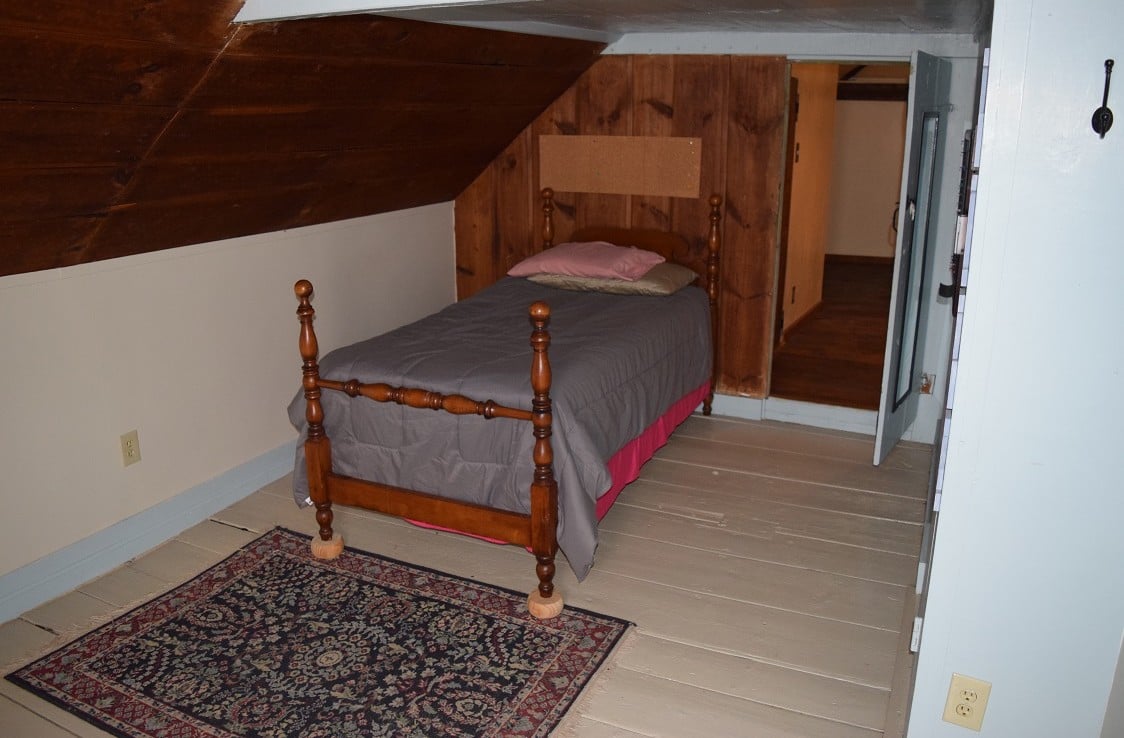 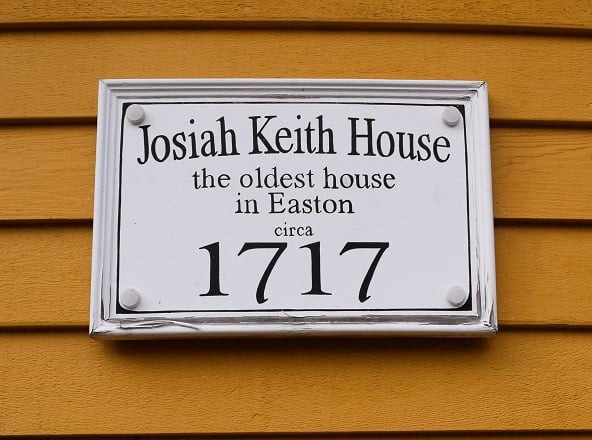