The Oldest House in Windsor, NY is Being Offered for Free to Anyone Who Can Move It 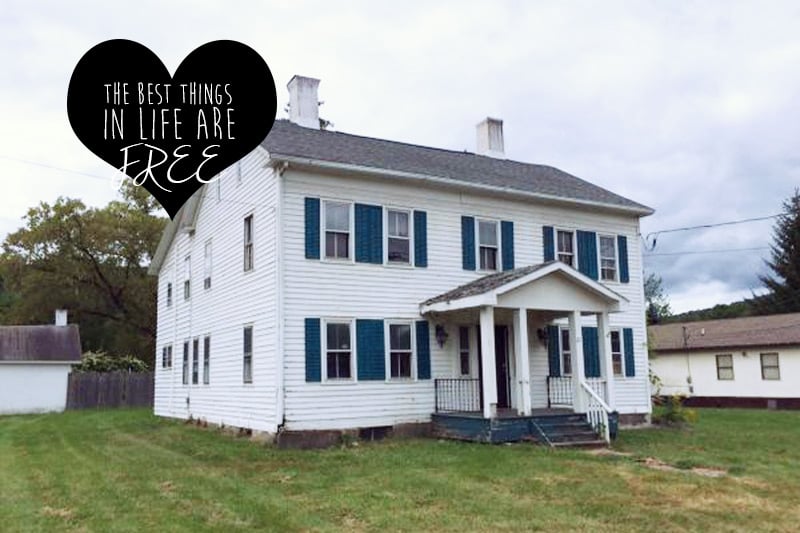 I want to thank Alison for tipping us off to this stunning ca. 1832 home in Windsor, NY, which she says is the oldest house in the town. It’s being offered for free, provided it can moved off the property (Wondering how the heck you move an entire house? Here’s how!) 1832 Federal style with two additions. Must be moved in its entirety or dismantled and removed. This is a sale of a house only and not the land. Subject to the conditions that: The development plan for the property is fully approved by any entity necessary, first. That the person purchasing the house can agree to remove all of it in the time frame necessary, with “time is of the essence”. That the person taking the house is qualified and insured to do so or hires a company of the same qualification.

The Frederick Hotchkiss house in Windsor was built in 1831 by the oldest son of one of the village’s founders, and patterned after the Dyer Hotchkiss house in Waterbury, Connecticut (possibly no longer standing). The Windsor house is remarkably similar to the extant house Frederick built in 1818 for his oldest son, David, in Prospect, Connecticut (now the home of the Prospect Historical Society, and listed on the National Register). Frederick Hotchkiss (1768-1846) was born in Prospect, Connecticut, the son of David Hotchkiss and his first wife Abigail Douglas. David Hotchkiss and younger sons Amraphael, Cyrus, Charles, and Gilead moved to Windsor in 1789 and were among the village’s earliest Euro-American settlers. Frederick remained in Connecticut, where he married Rhoda Hopkins in 1790 in Connecticut, and together they had four children survive to adulthood (Marilla, Julia, David Miles, and Clarissa). After Rhoda died in 1814, Frederick married Tabitha Barrett, who had a daughter from her previous marriage. Frederick, Tabitha, and children moved from Connecticut to Windsor in 1826 after his father’s death. The Frederick Hotchkiss house is built on land he inherited from his father’s estate. The following text regarding construction of the house is from the collection of the Hotchkiss Family Association in Prospect: “On January 1831 agreed with Mr. Stephen Farnham and James C. Chapel to build a house for me 25 feet by 36 feet two stories high with the plates raised above the beams with addition 20 feet square 1 ½ stories for kitchen buttery sink room entry. They are to hew the timber, frame, raise, cover and do all inside work fit for plastering- finished by first of October next. I am to furnish all materials- board them while at work- pay 235 dollars according to plans drawn from Dyer Hotchkiss house in Waterbury Conn.”
After Frederick drowned while attempting to ford Occanum Creek, the property passed to his son-in-law and daughter, Libbeus and Marilla Sanford, and by the late nineteenth century belonged to their son in law Spencer Smith and his family. Members of the Hotchkiss family were actively engaged in civic life in late eighteenth and nineteenth century Windsor: father David donated the land near the center of the settlement for a village green in the New England style; he and his sons built a church on the green as well. The brothers built bridges and mills, and served in a variety of civic roles (constable, postmaster, pathmaster). It is particularly noteworthy that Frederick Hotchkiss (and in some cases, he and his wife Tabitha) represented the Windsor community in testimony to the United State Congress in matters relating to abolition and the free soil movement. The main block of the house is typical of the Federal style: a heavy timber framed structure on a stone foundation, 2 and one half stories tall, five bays wide with a center entry, and two bays deep. There are two interior chimneys. Several additions to the rear were in place by the time of the 1887 bird’s eye view illustration of Windsor; these appear to have been altered during the twentieth century. However, except for the 1978 addition of a small front porch, the main block of the house appears much as it did in Frederick’s time. Notable architectural features include an interesting front door surround with side lights and four pilasters similar in style to the extant David Hotchkiss house entry, a wide cornice with prominent returns, an original fireplace and chimney of handmade bricks supported by a cradle of pinned hand hewn beams, and some original interior finishes such as the wide plank floors. Despite some loss of integrity (replacement window sash, some loss of interior finishes), the Frederick Hotchkiss house retains historic and architectural integrity of location, design, setting, feeling, and association. How to Move an Entire House

How to Move an Entire House

By Elizabeth Finkelstein. Remember last Valentine's Day, when we made a video about those 6 amazing...

Spotted on Craigslist! A Free Farmhouse in Iowa

by Rachael Meyerink We recently spotted this massive, classic Queen Anne in Ellston, Iowa, that is...

Free Houses! These 6 Gorgeous Old Houses Are Free For The Taking — Provided You Can Move Them

By Elizabeth Finkelstein. With Valentine's Day right around the corner, I know exactly what you're...

One thought on “The Oldest House in Windsor, NY is Being Offered for Free to Anyone Who Can Move It”